Ahead of Earth Day, Tim Dew (CEO of GingrTech) interviewed a number of sustainability professionals to get their views on how we can turn sustainability into action on the ground.

A CDP report released in 2017 attributed 71% of the world’s greenhouse emissions since 1988 to just 100 active fossil fuel producers. With nearly all emissions directly controlled by organizations, the game is now afoot on how we can get organizations to transform quickly and effectively to meet our global climate goals. How to improve business sustainability? How do you turn ESG policy into action? What are the benefits of a sustainable business?

Please note that all quotes used in this article are personal and do not represent the views of the organizations that they work for.

The pillars of corporate sustainability 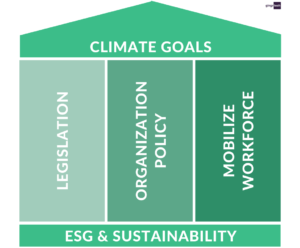 1. Governments have to legislate.
2. Corporate policy needs to change.
3. We need to mobilize the workforce.

As Governments around the world legislate to force organizations to implement change, the task at hand can only be described as epic. It’s hugely complicated. At the global end of things, there is the need to move whole economies away from the use of coal. Mechanistically, we need to find ways of getting carbon pricing and other structures to work effectively. Governments will need to look at individual industries too because a one-size-fits-all approach is not going to hit the mark. There is deep confusion too about how we measure performance under the current legislation.

Much of the legislation, as we are already observing, is far from refined and in places unworkable so patience will need to be exercised to allow these to be developed and made more sophisticated.

Simply put, this is going to take time. A time that we don’t have in hand.

Most of the larger organizations, particularly in Europe, have cottoned on pretty quickly that the tide has been turning for consumers. Many people are now making changes in their personal lives to reduce waste and are making active choices about which products and services to buy based on their perception of a brand’s approach to sustainability. And it cuts two ways: sustainability means reducing the impact on the planet and being financially stable for the future.

“It’s so important for organizations to make real change. In the pensions industry, sustainability means that we need to provide customers with products that allow them to save for the future without damaging that future. And we need to be there at that point. For our 20-year-old customers today, we’re talking about the end of the century”, says Solveig Hoy, Head of Group Sustainability at Royal London.

This is of huge significance for organizations; the risk of being found out for greenwashing is moving rapidly up agendas. And rightly so, the likelihood of it happening is increasing by the day and the impact could be fatal for a company.

But it doesn’t stop there, attracting talent and retaining talent has just taken on a whole new dimension, particularly in tight recruitment markets. The younger generation is planet sensitive and is already making active choices about who to work for. Getting this right is a way of making sustainability pay.

Every decision in every department in every organization will need to be optimized, and that is going to take humans to do it. Claire Traynor, Head of Foodservice and Sustainability Lead, Northern Europe at The Kraft Heinz Company, rightly points out: “Although this is not new, the need for sustainable transformation feels as if it is evolving very quickly. The problem that organizations are facing is that what to do and how to do it just isn’t in the DNA of the workforce right now. It’s just not in people’s bones.”

Typical transformation approaches (top-down) have a poor record of success. So, we need to think differently about how we can rewrite the DNA of the workforce. Claire went on to say: “It’s not just the frontline people dealing with customers, it’s the whole back office too”. Building peer accountability so that all decisions like taking a flight rather than using Teams or Zoom is an important part of the picture too. We have to hold one another accountable and that is a significant and immediate shift in culture.

At the end of last year, Mark Fowler (son of the famous US naturalist Jim Fowler) said to me: “Humans can’t detect CO2 like we can detect a lion or a gun. Humans are hard-wired to respond to immediate and present danger. That’s what makes the climate change problem so difficult. It just doesn’t feel like a real danger”.

Mark advises some of the largest corporations on the planet about how to apply sustainability to their organizations. It’s a brilliant way to look at the human problem.

Arguably one of the biggest leaps forward in computing last century was the move from serial to parallel computing. And more recently, we learned that we can bring anti-viral drugs and vaccinations to market in months rather than years by moving from a linear process to a parallel process.

António Guterres (Secretary-General of the United Nations) said at COP26: “Either we stop it, or it stops us”. We simply don’t have time to deal with this linearly by waiting for legislation, then changing policy, and then mobilizing our workforces.

All three need to happen at once. And when they do, mankind can achieve impressive results. 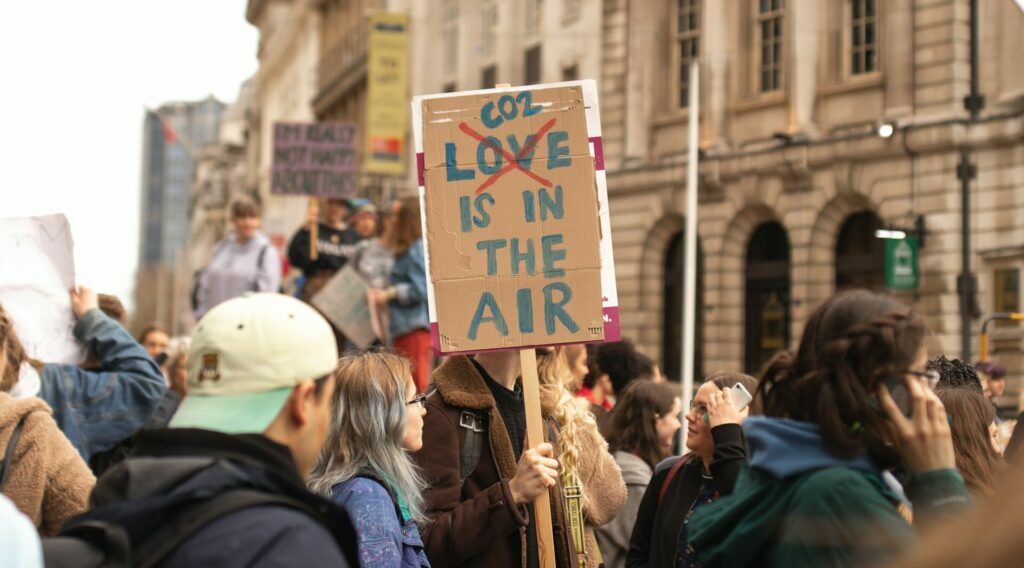 Having seen Scotland’s engagement numbers recently, I learned that only 10% of businesses are actively engaged in sustainability and only 50% of businesses think that it is relevant to them.

I am sure that Scotland is not unique in its corporate engagement numbers. The big issue for the non-engaged seems to be that becoming sustainable will be at the expense of profit and, trying to convince shareholders is a problem. This was seen recently with Unilever being accused of ‘losing the plot’. This problem appears to be particularly acute in the USA, as sustainability is seen by many as fundamentally anti-American. Unilever is out to prove that sustainability can be profitable. I truly believe that sustainability can increase performance within organizations.

To create change, you have to create dynamic instability a.k.a. throwing the balls in the air: you can’t change anything whilst they are all lying on the ground. To do so costs money and you have to expend effort. As the balls come back down, you notice that you don’t need all of them and you can reposition them more optimally. Happily, this improves productivity and thus financial performance. It is the change itself that causes improved performance, and sustainability is one giant reason to get the balls in the air. Let’s look again at Unilever in a couple of years, I think we might be surprised.

The complexity of sustainability in business

Claire Traynor went on to say: “The complexity of the problem is causing paralysis”. This is such an important point. The problem is huge and multi-faceted. Understanding the ever-changing regulatory environment, building workable policies that meet those legislative targets, and reprogramming our workforces is no mean feat. I don’t envy the roles of any of the sustainability leaders that I have interviewed. It’s a tall task.

How to become a more sustainable business

The solution to climate change

Legislation and policy are things we know how to do. I believe that mobilizing the workforce is going to be the toughest challenge, particularly because the data around creating culture change shows that humans don’t like change very much.

The solution for climate change, sustainability, and ESG will be actioned by 8 billion tiny knives, not large government interventions. There has never been a larger groundswell of people wanting to make the change. We just need to enable them and unlock the existing potential in our workforces.

What we can all absolutely agree on is that we need to stop talking about the cause of why climate change has happened and instead think about the stewardship of this beautiful planet: for our children to enjoy.

Let’s do this together.

Tim Dew is the CEO of GingrTech, he invents and designs business simulations to accelerate transformation in workforces across the globe. GingrTech’s latest simulation is called GoGreen.Inc, a sustainability training tool that enables teams within organizations to integrate ESG thinking into their everyday decision-making, with no slide decks involved.

I have spoken to a range of Sustainability heads over the past few weeks and I would just like to say a big thank you to all of them for helping me shape this article. In particular Solveig, Mark, and Claire for taking time out of their busy schedules. What delighted me most was the sheer passion and energy that they have for their roles – if my meetings with them over the last few weeks are anything to go by, we have got some very smart people working on the problem which is a big comfort.

Ready to transform your business?